How do you mark twenty-five essays in an hour, while ensuring students know how to improve?
Has anyone ever found a way to 'work smarter, not harder'?
Dylan Wiliam says they should spend longer reading your comments than you spend writing them- how does that work?

The Theory
The Sutton Trust report 'Pupil Premium Toolkit' listed effective feedback as the highest impact action (adding eight months of learning per year) - against the lowest cost.  They define feedback as being information which produces improvement in learning - but note that it can have very varied effect  - including a negative effect, and can be difficult to make work in the classroom.

A lot of Dylan Wiliam's writing and speaking is given over to making a couple of critical points, things not to do - which I'd like to raise briefly and then go beyond:
1) Don't write grades on work - I'm always surprised that some people don't know about this; I'm invariably depressed how many intelligent people and schools do know about it but insist on grades nonetheless - the feeling of being judged overrides any consideration of improvement.
2) Provide task-related feedback, not ego-related feedback - if the feedback is about you as a person, it's not conducive to learning about how to improve your learning.

There's a lot of interesting psychology to talk about here, and right now I don't want to say anything more about it at all.  I was sold on all of this about four years ago, and I vowed never to put another grade on a piece of paper again (which caused a series of fruitless conversations with various superiors).  More time is spent and ink spilled over these issues than anything else - but solving these things on their own, while a necessary prerequisite, does not ensure my feedback is actually effective.

So what should we be doing?
"If I had to reduce all of the research on feedback into one simple overarching idea... it would be this: feedback should cause thinking"  (Wiliam, 2011, 126).  It requires 'mindfulness' - time spent thinking (really thinking) about the task (111-112), it should provide a 'recipe for future action'  (121) preferably broken down into small actions and it must be focused on one area or aspect at any one time (130).

Wiliam offers examples of activities - for example, giving feedback on separate bits of paper and asking students to identify whose feedback is whose - so they actually read it and understand the quality of the work.  However, what does the marking actually look like and how should it be done?  And how do we make it 'more work for the recipient than the donor' (132)? 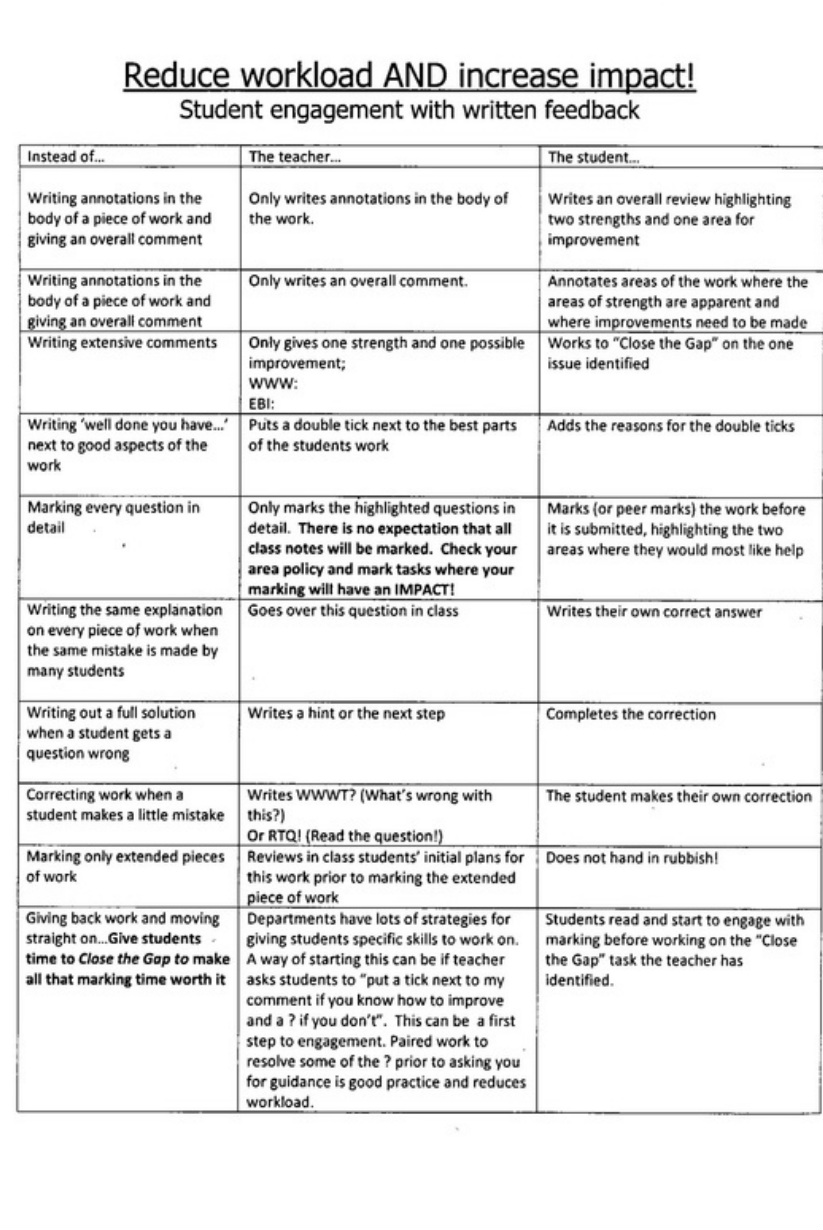 This page was heavily inspired by this post by Tom Sherrington's post: Making Feedback Count: "Close the Gap" (see link below) which I highly recommend and the following document came, via his page, from Nathan Cole at Wilson's School. 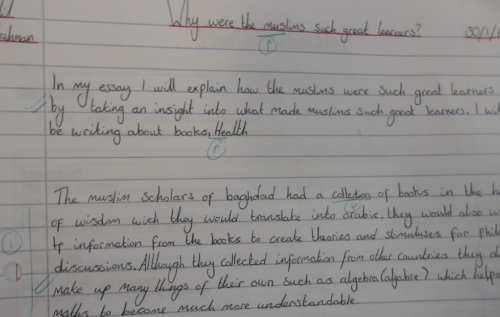 Just one example, from the first time I tried this with a class.
What I did; student responses

1) Identified three good sentences/elements of the essay
Explained why they were good.

4) Wrote an overall 'what went well' and 'even better if' comment for the essay.

student responses...  (does it work?)

This took time - and a substantially degree of modelling (using hinge questions to ensure they'd understood each model).

However, the following three examples suggest that students understand the merits of different constituent parts of their paragraphs.

As and when they write their next essay, it will be clearer whether this has had a lasting impact - however, being able to explain the merits of their work like this, I would be surprised if they could not benefit from this next time.

I did spend three lessons on this feedback - demonstrating what I was looking for in detail, providing time for the annotation, the worksheet and the paragraph re-writing.  This may seem like a long time - but these are Year 7's and this is the first time we had written a full essay together - so I don't begrudge it and I don't think it will take nearly so long second time around.  If you are unable/unwilling to provide this time, the marking strategy becomes a cop out.

I went around and checked that students had understood the comments and written coherent, correct responses.  I didn't get to every student in every class, but I got to enough to be confident they had understood what I wanted.

As Laura McInerney once said, good teachers are magpies - they collect, borrow and steal good ideas.  I hope at this point I won't need to push this much further.  I recommend reading Tom Sherrington's post: Making Feedback Count: "Close the Gap" which shows more examples of this in action.

Compare to the long marking I've been accustomed to, I'm convinced students actually understand what good work looks like and how to improve much better this way.

At the same time, having reduced my marking time to a third or a quarter of what I would previously have spent on an essay, not only does this free up time for planning, assessing, whatever - it also encourages me to set and mark extended writing more frequently - I never thought it could be practical to do it on a frequent basis without creating an unsustainable marking burden - actually, I could do this every week.

I'm still experimenting with this - and will post up new ways of doing this as and when I get the chance.

Update:
I have written about how these techniques seem to me six months down the line - and my continued success, or otherwise, with them, here.
comments powered by Disqus
Powered by