%%TITLE%%
Before you say anything - count to three...
What happens when you wait three seconds before asking or answering a question?

The finding that most teachers wait for less than a second for a student response to their question before either directing it to another student, reframing the question or providing the answer, is so dated (1969) and established that it has entered general knowledge.  It was only at a recent Inset led by Dylan Wiliam that I learned that the same applies to pausing before responding to students' responses.  One of my new year's resolutions, therefore, was increasing this 'wait time' - here are the findings after a week...

Rationale
The key reading here is Tobin's 1987 literature review (reference below), which, in brief, suggests:
- Increasing teacher wait time leads to longer student responses and less 'failure to respond', these responses are increasingly complex, there is more student-student discourse and student-initiated discourse, decreased student confusion and higher achievement.
- Achieving this requires a 'threshold' of three seconds (increasing wait time to only two seconds may not achieve these effects).
- Many teachers, even in controlled studies, struggle to attain these longer wait times.
- There are possible negative effects, this is no panacea and must fit into a context of good teaching (and particularly challenging questions).

Context
This year I am only teaching Year 7 classes (but seeing them eight times a fortnight).  The school has very high standards of student behaviour, notably (in this context) no calling out.

Method
With the first activity in students' history lessons being writing their new year's resolutions, I shared mine with them immediately afterwards. This was helpful, as the prolonged wait is not a common conversational strategy and was as unusual for me as for them.

Results
Can a teacher achieve a three second wait time?
Of course.  Slightly easier said than done, but not much. It is made much easier by watching the second hand move three times on the clock on the wall before speaking (rather than pausing - three seconds is a long time - particularly if you are used to quick responses).  (This has the additional benefit of leading me to position myself away from the front of the room, which fits with the overall aim of focussing more on student speech).  It takes some concentration to keep this in mind initially though – and with a more challenging group dynamic/an environment where behavioural norms had not yet been established, increasing wait time would not be a priority I think.

On occasions I found myself forgetting and had to remind myself. I particularly struggled towards the end of an exhausting lesson on Friday afternoon where students were struggling to get a series of key points and I was seeking 'correct' answers from them in order to ensure that we had reached correct answers before the weekend!

It also takes longer to do this in group discussion or when speaking with individuals, because it is even less natural!

This reinforces to me Dylan Wiliam's point that a teacher should only try to change two or three things about their practice at a time – otherwise everything else falls apart – it requires sufficient concentration on this that trying to do a substantial other change would be counter-productive.

What happens when a teacher waits for three seconds?

Pretty much what it says in the research. Indeed, it is the dramatic nature of the results that leads me to comment on them so quickly.

The most obvious point has been improved student responses: students are able to make better and more developed comments when I wait longer after their responses.  Students continue where I might otherwise have cut them off (because they've already made a useful response or because they appear not to be about to) and/or they respond in more detail as they realise their initial comment requires more developed explanation or justification than they offered.

Most notably from students whose responses appears initially not to be answering my question in a correct or evidenced way... often the follow-up point, which they would not previously have been made, shows that they were coming back to my initial question or were able to make clearer points than I expected. As such, I suspect this tactic supports students who are less well-served by classroom discussion normally.

Students are listening and attending to conversation better. This is particularly noticeable in the pause after a student has spoken and before I respond – they are visibly keening to hear what will be said next. I have not tested this, but it should have an impact on retention.

This facilitates a more considered, thoughtful discussion and a more reflective atmosphere.  Allowing me to respond in a more considered way and enabling students to respond to each others points better (as such, it dovetails with my move towards what Dylan Wiliam calls 'pose-pause-pounce-bounce' questioning.

Greater humility – on my part.  Conversations in which you merely wait your turn to say your part tend to be frustrating and dull.  But this is what I have been doing in my classroom!   By forcing myself to wait until a student has finished their point (and another three seconds before) I force myself to listen better to what they say not just what I want to hear or one point to comment on.  This makes for more 'interpretive listening' (listening for what students are thinking, not just what I want to hear) and 'error-seeking' (finding out where they're going off track and helping them correct that.   It also increases the importance of what students are saying I show that I value student responses more - I presume this leads students to do the same.

An impact so positive students have already recognised it.  Well, one student at least.  Among many fascinating responses within lessons I had not expected from students, the thing that sticks with me was from Friday morning, as I chaired the student voice (council) meeting. I was seeking to get through several items in fifteen minutes, from eight individuals who, by their appointment, had a fair bit to say.  Perhaps this wasn't working - but Aaron turned to me and said: “Sir, I think you should try that three-second thing”... Having taught him only three or four times this week, he had already concluded that this technique is sufficiently effective to advocate its use to me.

Limitations and problems
Clearly, this is not a random controlled trial. However, these have been done for me – I don't need to do the research from scratch!

Some students don't know when to stop!  The changed classroom dynamic is a shock for many of them, particularly if they are less confident and would prefer an immediate response - who flail slightly as they have finished their point and they repeat it.  It is bliss, however, for students whose enjoyment of the sound of their own voice sometimes outweighs the merit of the point(s) they wish to make.  I think a little training in knowing when to stop/making a concise point might come in handy at some stage.

Fewer students get to talk – exacerbating the traditional problem with using lollipop sticks.  This can be alleviated by group-talk and pair-talk, but it remains a problem, associated with that above. 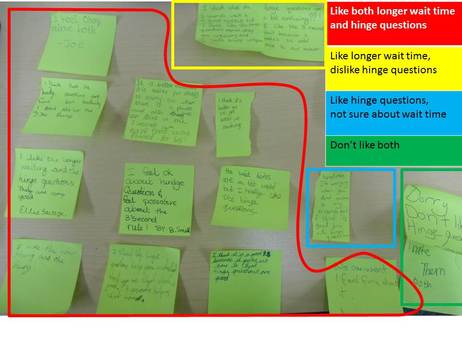 Eight days in, I asked a (diminished) class to write on a post-it their responses to increased wait time (and hinge questions).  The image to the left shows their responses.

All those outlined in red and yellow were in favour of the increased wait time.  Comments were surprisingly positive, "it is easier for others to carry on...  and also we can think"...  "they are very good".

The green outlined were both against - but neither gave reason or explanation.

There were two questions "it's a bit worrying" and "weird" - but both of those are, I believe, true.

All the responses are shown below.
Conclusions
As Tobin says, "Wait time is not a panacea, and unless other variables are at optimal levels, the advantages reported in wait time studies may not be apparent" (p.88).  I would not recommend this as a new teacher's first priority - indeed, logical prerequisites include establishing behaviour, notably listening to others and teachers' work on higher-order questioning.  However, if these are done, this technique appears to be exceptionally powerful and simple, in:
a) promoting achievement (particularly among lower-attaining students)
b) improving the classroom dynamic
c) making the teacher a better person!

I am now doing it more with adults. This is really odd but quite nice!

If you have JSTOR access or similar, I highly recommend reading Kenneth Tobin, 1987 'The Role of Wait Time in Higher Cognitive Level Learning', Review of Educational Research, Vol 57, No 1, pp 69-95

Update:
I have written about how wait times look to me six months down the line - and my continued success, or otherwise, with them, here.
comments powered by Disqus
Powered by