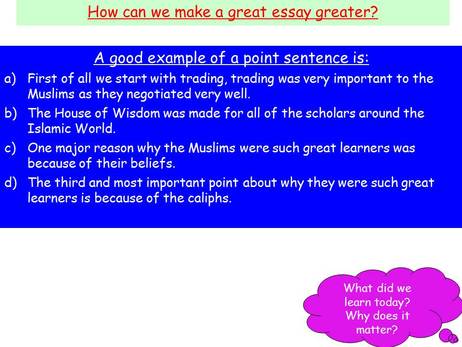 A preceding example - which was designed to check whether students understood the idea of a point sentence.

All the sentences were taken from essays students had already written - and this was used to prepare them to act on feedback (to be covered soon).

This brought to light numerous misconceptions (in most classes almost no students identified d) as being the best option).

Using students own essays provides a strong basis for the hinge question - but in the long-run I should probably adapt these, rewriting them myself, to make the cognitive rules at play clear.

hinge questions in use 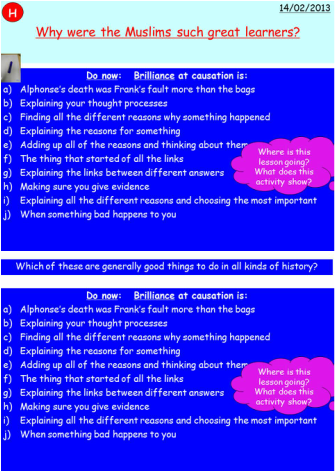 As I mentioned, one of the problems that I found in introducing hinge questions was that they led to a very didactic style of teaching which unduly taxed students' attentiveness and wasn't particularly sustainable.

Here is another example of a hinge question, used to ensure students understood what causation is.

I had predicted some of the areas where students might come adrift - and one was their mixing up things which are good to do generally in History - like giving evidence - and things which are specifically important about causation.


So, after the first one, I asked them to discuss this individual question for two minutes.

Essentially this turns the initial hinge question into a series of hinges - working towards the desired answer - but the real benefit lies in enabling more discussion and small group thinking, based around the same idea - and reducing the amount of whole class discussion.

towards a desirable hinge question 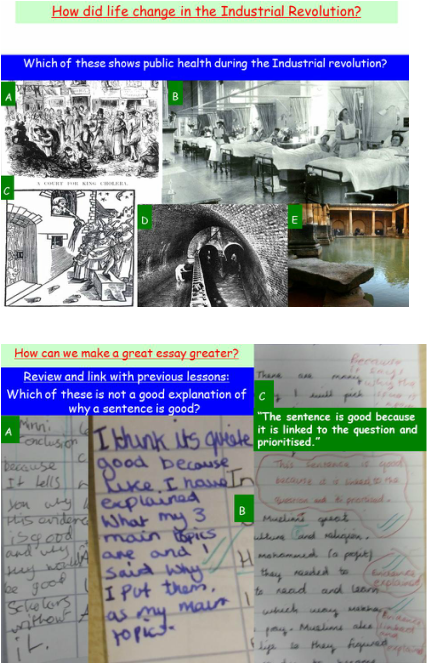 Ultimately, all of the questions shown above are too detailed and intricate to be 'perfect' hinge questions - remembering that we are aiming for students to be able to read and respond in one minute.

I think these two examples are closer to what a hinge question should be in History in the long-run (although still problematic).

For example, in the public health question, E is deliberately the only colour picture, because students frequently assume that a picture in colour must represent something modern.

That said, it is still possible that students might choose E for other reasons - indeed, you could argue that this does not even meet 'Rule I' suggested by Dylan Wiliam - the response can't easily be interpreted.

Perhaps this example is closer to what I'm looking for (students have been writing the reasons for my giving them double ticks by individual sentences, of which more anon) - all three are good examples, so choosing any one letter suggests a lack of understanding of what a good explanatory sentence is here.


So, in sum, hinge questions are still very much a work in progress for me.  If you have a good historical hinge question - or you've seen one somewhere, please let me know...


Update:  Some months down the line, here are 28 hinge questions for use in history lessons.
comments powered by Disqus
Powered by