Do they understand this well enough to move on? 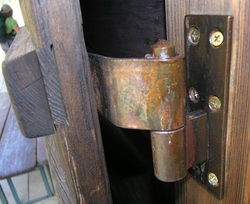 What happens when you use hinge questions to check student understanding?
What is a hinge question?
A check for understanding at a 'hinge-point' in a lesson, so-called because of two inter-linked meanings:
1) It is the point where you move from one key idea/activity/point on to another.
2) Understanding the content before the hinge is a prerequisite for the next chunk of learning.

Rationale
This is a brief item of formative assessment which enables the teacher to know whether it is appropriate to move on, to briefly recap, or completely reteach, a concept before moving on - what Dylan Wiliam calls the most important decision a teacher has to make on a regular basis.  If you get this wrong and some students have not understood, then the next activity may well fail for many students - because the concepts build one on another.  if you get this wrong and reteach pointlessly, then engagement will slip and time will be wasted - although this is far less likely I suspect!

Construction of a hinge question
This is an art - Wiliam emphasises the amount of time and collaboration which goes into doing it properly - but also the value of this process in offering useful information and creating durable questions and activities.

1) You have to be able to get the information from them there and then and be able to understand and act on it very quickly – Dylan Wiliam suggests that ideally students should respond within one minute and teachers be able to view and interpret responses within fifteen seconds (2011, p.101). You want a snapshot, not an essay.

2) You have to know why students have given the answer they have given, from their answer (without going into questioning students – which takes up too much time) - so it must be impossible to reach correct answers using an incorrect thought process.

A series of step-rules which I found a useful tool were explained by Wiliam (2007) thus:
I) interpret responses
II) only reach an answer using one thought process (not have two answers which the same thought process might lead to)
III) know which rules led to which answer
IV) have every rule lead to a different answer

I've put together and discussed some examples here with two large collections here.

Method
Excited by the concept, I resolved to introduce hinge questions to all my teaching.  As I found I wasn't clear enough on areas of misconception to immediately formulate four or five credible incorrect responses, based around different 'cognitive rules' - so I based my questions on post-its collected at the end of a lesson summarising the key point of the lesson - and then used this to formulate a new hinge question for the following day.

At first I found this left me with too many possible responses.  I tried grouping them.  Where I was unable to group them, I gave them all of the options possible - and then narrowed them down based on student responses the first time I taught the lesson.  Some examples of the questions I came up with are here.

Sifting post-its to create possible options - leads to the options shown on the right. The misconceptions evident here are b) which is an example of Muslim learning culture, not a cause and d) which is a compendium of generic points about learning, which do not apply specifically to Muslim culture at the time.
Results
Firstly and most dramatically, I learned far more about the errors students were making.  For example, having taught students the chief causes of flooding, I was surprised to see a) global warming come up as one suggestion (even though I had said it exacerbated flooding,  not caused it), b) half of one class agree that it was a cause and c) some students who agreed it wasn't explained 'because you said so last lesson' - they had not understood the reasons why.  Another highlight was the number of students who believed that Muslims were good learners in the Middle Ages because 'they studied hard', they 'tried their best' and so on...  and I realised that students had overlaid what they had been taught about learning well onto scholarship in the Middle Ages - irrespective of the historical events that actually took place.  On the same topic, I unearthed a recurrent belief that comparing Muslim and Christian mathematical knowledge in the Middle Ages in the favour of the Muslims was wrong - in responses dictated by students' own religious beliefs.

Had I not 'sought error' in this way, I would not have been aware of these, understandable - misconceptions, nor would I have been able to correct them.

Secondly, it slowed teaching dramatically - indeed, a handful of lessons were brought almost to a standstill as I kept trying to talk through student misconceptions.  This risked disengaging...  and reinforces the importance of only trying to change two or three things at once.  With more experience I learned to predict student misconceptions and create learning activities around them, to know when to move on with the group and help individuals later and, most powerfully, to activate students to explain to each other or debate with each other and work towards a conclusion.  At the simplest level, it involves breaking down questions into sub-questions, enabling students to isolate the characteristics of individual lessons.

Limitations and Problems
The slowing of lessons, discussed above.

Students need to be taught what you are doing - to avoid any stigma to getting 'wrong answers' - and to understand why you care so much about their answers.

Understanding where students are going wrong - exactly - requires deeper thought than I had previously given to this problem.  However, I would say all of these are 'operational issues' rather than actual problems.

Conclusions
Hinge questions have transformed my teaching - by giving me a significantly improved understanding of what my students understand, what they don't understand, and why.  They are incredibly useful for me as a way to improve my appreciation of what students are thinking in lessons - as I construct hinge questions I am forced to spend far more time thinking about student understanding.  Additionally, they allow me discuss and correct student misconceptions in a safe environment for students to make mistakes - because almost all of them will make mistakes at some point.

Very little has been written about this in History - extensive searches have failed to reveal much discussion of them.  I think this approach lends itself more naturally to Maths and Science than to History - in as much as some of the cognitive rules are clearer.  However, I wonder if there might be a snobbishness about multiple choice questions, for example, that is holding History teachers back.

I would love to read more about how this is being used in History - as Dylan Wiliam says (of Spanish), such questions will "still be good in twenty years' time" because learners will still experience problems in the same areas and to collaborate with others - who may identify misconceptions which I am missing.

Further Reading
Dylan Wiliam has two useful papers available on his website: 'Diagnostic items: is there value in just one?' and 'Analyzing diagnostic items: what makes a student response interpretable?'  The latter, a fairly theoretical/abstract coverage of this, was the one which helped me to truly appreciate the complexity and requirements of a good hinge question.  There is a useful discussion of what hinge questions are - with an English example - from David Didau here, and a further discussion of hinge questions in science here.

I would like to see hinge-point questions used more, because I think they are a fantastic way to understand student understanding.  I would also like to collaborate on this – because others will have identified different student misconceptions and sharing this is worthwhile.  They travel well and last well, because in twenty years, students will be struggling with the same aspects of History they do now.

Update:
I have written about how hinge questions look to me six months down the line - and my continued success, or otherwise, with them, here.
comments powered by Disqus
Powered by