how can i help my students write (and think) Fluently?
experiments with process-based structures, modelling and preflight checklists 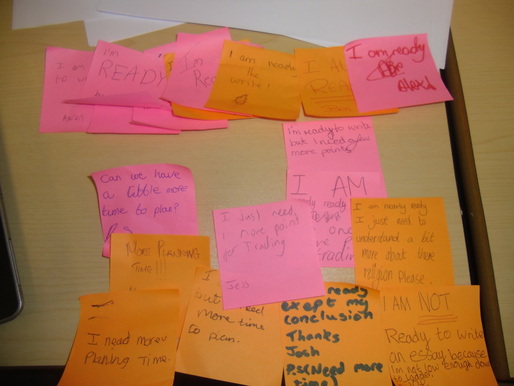 The post-its on the left represent a snapshot of the preparedness of a class of Year 7 students about to write their first full history essay.

Having spent three or four lessons researching and planning, I asked students how ready they felt, and invited students to tell me one thing more they wanted me to clarify, offer, or help them with - before they began writing.

All of the top row (the majority) state students are ready.  Of those below, the majority ask for more planning and preparation time.  Only two ask for anything beyond this.

How do we get students ready to write essays like this - and feeling confident about it too?

The ideas behind this, not unusually - come from Dylan Wiliam.  They are all ways of 'sharing and clarifying learning intentions and success criteria' -while also doing something to activate students for each other and themselves.

Part 1) A process-based structure - taking students through the steps of constructing a piece of work.  Wiliam draws the analogy to sports coaches, who break down an action (like throwing a ball) into its constituent parts and offer feedback on those parts.  The focus on the process helps students to get better, by 'breaking up the long journey from where the learners are to where they need to be into smaller steps, making it more manageable' (2011, pp. 62-4).

Part 2) Modelling - one which hopefully doesn't require a massive amount of theoretical justification - to steal one quotation from Wiliam, to improve, the student must come to 'hold a concept of quality roughly similar to that held by the teacher' (Royce, 1989, in Wiliam, 2011, p.55) - modelling what an excellent piece of work/response looks like being a key way to achieve this.

Part 3) Preflight checklists - a way of providing structured to peer feedback sessions, reducing the repetition of obvious marking points and giving students a better understanding of what is expected in their work.  Students read through the work of another, using a checklist to ensure all the required contents are included.  By providing criteria for students to check each others' work, it provides students the chance to identify strength and weaknesses in that work.  'Once students have pointed out such errors or weaknesses, they are more likely to avoid repeating them in their own work (2011, p.66).'  to point out the errors and weaknesses in each others.

I considered writing on each of these separately - something that, in a sense, they deserve.  However, I wanted to show the process by which I currently try to get a good essay written - rather than harping on about each piece.

I've put some links at the bottom of the page to others who are writing and grappling with these ideas at the moment.

How does it work?
Students are in tables of four and have already done some preliminary reading on the topic at issue (they have their readings/notes to hand).  This sheet is the series of steps they go through in planning an essay.  They write individual essays plans but are responsible for ensuring everyone understands each stage of the process.  Students use a counter to represent their progress down the sheet - moving the counter only when all members of the group have completed each stage (there is a slight ambiguity here - the counter means students must help each other before moving it on, but in fact, students may begin on the next section while still offering support to their peers on the previous section if necessary).  For added clarity, I ask students to have one of their planners showing red, amber or green, depending on how well they are doing.

Why it works
It seems to me that this sheet offers, in microcosm, a guide to the process of creating, structuring and preparing an academic argument.  The two things that make it work are:
1) It breaks the massive task of creating an edifice of thought into small chunks.  Descartes had this idea that, in dealing with a philosophical problem, you should do as the Romans did: divide et impera.  I'm increasingly sure that this is also the critical strategy for teachers and students to adopt - breaking problems down into smaller and smaller blocks until solutions become possible.  The individuals who I think have gained the most from structures like this are the students who struggle most with planning an essay.  (This shouldn't be too surprising, given Dylan Wiliam's findings on this).  Students with previously low attainment can work through this process independently and explain how and why they are doing it.
2) It induces collaboration - somehow, the mechanical act of moving the counter on creates a decisiveness about the act of announcing progress- and gives a clear accountability (I reach a group and say - explain to me what you decided about the last section - ensuring they have achieved this adequately).
3) Dylan Wiliam talks about how the support we offer can become a crutch.  Writing frames can often fail our students in helping them structure an essay - because they are used without understanding of how an argument is constructed.  This structure is open enough to allow flexibility - and higher-attaining students may play around with different aspects of it.

Questions I'm still considering
1) Having said that this breaks things into parts well, I'm still unsure that the idea of linking evidence with explanation is clear enough.  I think this is something to be exemplified and taught separately, but perhaps a separate sheet on this would help.  There's more on this just below.
2) The tension between what the group do collectively and what happens individually (on the whole it works pretty well, but it's a weird tension nonetheless).
3) It takes ages and ages!  Maybe because students are doing it properly, independendently.  The idea when I first created this was that they would do it again and again and, by the time they faced exams, they would have internalised this way of thinking, they would be able to manage it quickly.  I've never used it more than a handful of times with any one group though - perhaps now, as the sole history teacher at my school, this year and next, I will have the chance to test this. 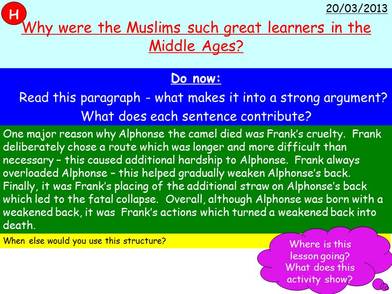 How does it work?
Students read the paragraph (relating to an example of causation we had discussed the previous lesson, on which more here and here).

I then lead discussion on the paragraph, highlighting the point, evidence/explanation and evaluation of the paragraph and the fact that this structure could be used in any form of persuasive writing.

How much does it work?
Not well enough!  Although students were able to respond well to the discussion at the time, they struggled to replicate the evidence/explanation I wanted in the essay.

My further disappointment with this method rests on the fact that, when asked which of the three things highlighted on this page students found most helpful, nine students said the planning sheet, nine the preflight checklist (next) and one said all three were useful in different ways...

I think the bottom line is that me discussing it with all students at the front is not the most useful way of leading understanding of the concepts - and on returning to Wiliam's work on the subject, I found a series of better ideas to pursue.  A model paragraph which they spent longer deconstructing individually might be more useful - I have put some ideas further down this page - but, into a second year at the school, I need new collections of student sample work with which to do more creative activities.

How does it work?
Having written their essays, students used these, in pairs, to check each others work - writing either a tick or a brief comment.  The essay was then returned and students had time to explain their comments - and then time to go back to their essays and make the changes suggested (although, really, I as much expected it to be useful in as much as they now had a clearer understanding of what was expected from doing the checking, than from the comments offered).

How well does it work?
Fairly well - but more in the mechanical aspects than the more complicated ones - which is to say, titles, dates, whether or not students had written an introduction.  All of this is useful - certainly.  However, there is a question in my mind as to how well students are able to comment accurately on the link between evidence and explanation - on which, more below.

part 3b) a preflight checklist in english

Here's another version, developed by my colleagues in the English department.  I prefer this, because I think the questions involved here are better simplified - and closer to a level at which all students are able to respond:

I used this sheet as part of students' subsequent improvement effort - in order to support them to improve their paragraphs.  In fact, I should probably have used it before the main effort of writing - so that they went into the essay fully understanding paragraphing.

Teachers get better - but not quickly enough, to quote Dylan Wiliam once more.  On the one hand, in only four and a half years, I have developed a half-decent series of methods to help students write better essays and understand how to do this better.  On the other hand, it's taken me four and half years and I still can't get a brilliant essay out of every student.

I am convinced about many aspects of what I'm presenting here.  I'm sure that process-based support is critical to student improvement - and that the sheet above is a passable way of doing this.  I know that modelling is important and that the work above pushes in the right direction.  And I'd far rather that students highlight obvious corrections and improve their own work than I do.

The devil is in the detail - are these the best methods to get this done?  Writing this has forced me to reflect further on what I'm doing and reconsider how much it's working.  See next steps...

next steps - yours and mine

My next steps:
at the time was to mark the essays like this.
in essay-writing:
- to have another go at paragraph writing
- to reconsider how effective my choice of learning activities is in making models clear to students and rework this to make it more effective.

Your next steps:
1) Reading two posts in the last week might help:
Joe Kirby's writing on cognitive science contains many interesting points which I think some of this exemplifies- regarding questions such as the importance of modelling, of process-based support and minimising working memory load.  And it's a good read anyway.
Lee Donaghy's writing on the series of steps taken to get students paragraphing well - has really made me think about this further.  I now think I should perhaps have stuck to asking for one paragraph and working to perfect that - and I'm looking forward to future examples from him about how he makes the teaching and learning cycle he uses work.
2) Responding:
I would really value comments on this - particularly on possible improvements to what I'm doing.  I would also very much like to see other examples of this being tried - sheets and powerpoints you have used, reflections on how it went.

Update:
I have written about how wait times look to me six months down the line - and my continued success, or otherwise, with them, here.
comments powered by Disqus
Powered by